As much as being in the village again was uncomfortable, and how anxious he was to leave, Connor was happy to go with Dorian to meet whoever his father had sent to convince him to go home. He was surprised Dorian had even asked; they were friends, certainly, but Elissa was the one who gave him the note Mother Giselle had tried to hide. Despite Connor’s many horrible attempts at flirting, Dorian had never shown much interest back.

When they arrived at the tavern, it was entirely empty.

It was never empty. Even aside from the mages, he had never seen it less than completely full of people.

He tensed and spun around to face the staircase, glaring up it.

Connor looked up as a tall, older man in full robes slowly descended. 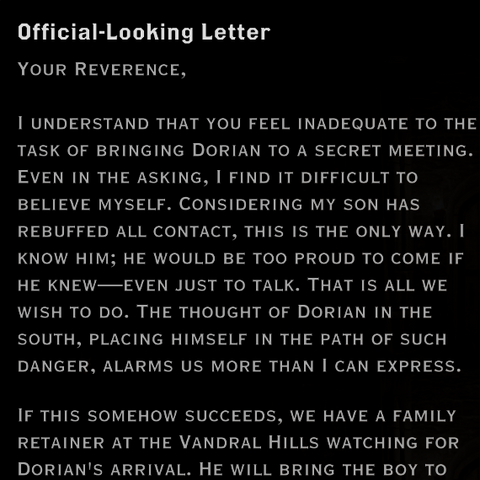 The retainer was, what, just a smoke screen?”

“Amazing what happens when I find people who actually care about my well-being.”

The older man turned his gaze on Connor. “And you are from the Inquisition?”

“Yes,” he answered cautiously with a quick look at Dorian, who looked away as soon as their eyes met.

“I am the Inquisitor’s nephew.”

“Then I apologize for the deception. I never intended for the Inquisition to be involved in this.”

Dorian turned back to his father. “Of course not. What would people think? ”

The older man just let out an exasperated sigh, still looking at Connor.

“This is how it has always been.”

It was as though he was saying, this is ridiculous, and I expect you to agree with me.

Like he was dealing with an unruly child rebelling with no cause.

Connor knew that tone, had heard it countless times from his own father, aimed at him, or Alistair, or even Uncle Teagan. The tone that bled through every single letter from his parents while he was in the Circle. Dorian knew it, too.

“Yes, father, let’s talk about your surprise at my attitude, how mystified you are by my anger!”

“Dorian, there is no need to-”

“I prefer the company of men.

“‘The company of men’?” he asked incredulously. That was what was so important that Dorian’s parents ruined their relationship with their son?

“Oh, I’ve more than heard of it,” Connor blurted out before his mind could catch up with his mouth.

“I think I knew that about you.”

Dorian’s father sighed heavily again. “I knew that was what this was about.”

“No. You don’t get to make those assumptions,” Dorian snapped back at him.

“Had I known I would drive you to the Inquisition-”

“I joined the Inquisition because it was the right thing to do .

It had nothing to do with what you did!”

“ He taught me to hate blood magic - the resort of a weak mind.

But what was the first thing you did when your precious heir refused to play pretend for the rest of his life?!”

He paced away for a moment before spinning back around, tears in his eyes. “You tried to... “I only wanted what was best for you,” Dorian’s father argued back.

“You wanted the best for you! For your fucking legacy.

He stormed off again across the tavern, leaning forward on one of the tables. Connor slowly walked up beside him and put his hand over one of Dorian’s.

“We can go, if you want,” he said softly. Dorian glanced at him. “You can always change your mind later. On your terms. Not his.”

He stood up stiffly.

The castle was the easiest place to stay. Uncle Teagan was happy to see Connor at least, and it was only for a night. His hands were shaking and it was hard to breathe, but he just had to get through the night.

He couldn’t sleep - refused to.

He knew he would regret it in the morning when they had to ride back to Skyhold, but he couldn’t deal with the nightmares. They were bad enough when he wasn’t in the castle. It was why he had adamantly refused to stay there before the Conclave.

He wandered to the library instead. He wouldn’t have to go far, no chance of running into anything he didn’t want to remember, and it should have been empty.

“Can’t sleep?” Connor asked as he walked in.

Dorian sighed and set down the book he had been rifling through, sitting back against one of the tables.

“I usually can’t,” he said vaguely.

Dorian folded his arms over his chest. “Come help me look through these then. Might as well have company.”

He walked down the steps carefully, trying to follow what little light came from the lanterns.

When he settled next to Dorian, the lights all brightened suddenly. He looked at Dorian who smiled back thinly.

They were both silent for a while. 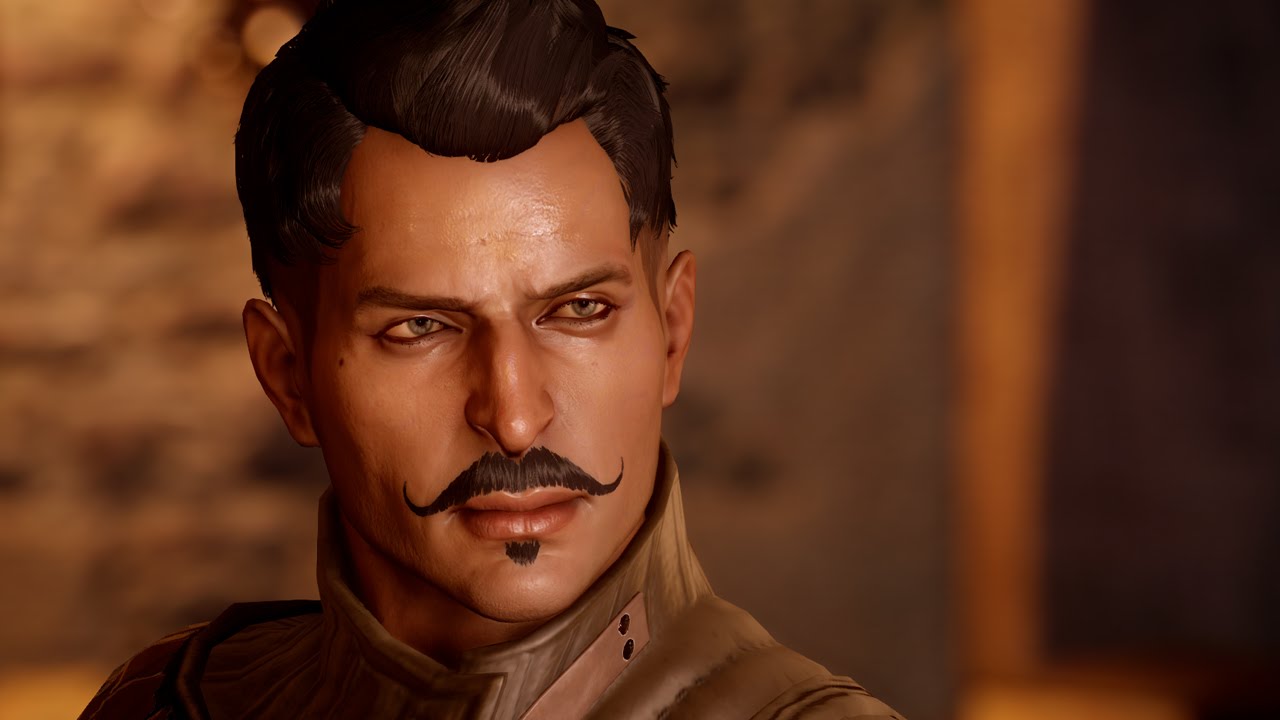 Dorian picked up another book, flipping through the pages blankly.

“Do you want to talk about it?” Connor asked quietly.

“My father means well,” Dorian murmured. “He cares for me in his way, but... He’ll never change.”

“What did he do? You said he tried to change you.”

Dorian shut the book, fidgeting with the bindings.

“He had me ripped out of bed when I was with another man. Locked me up, and then one day, he...”

He gripped the edges of the books so hard his knuckles went white.

“He tried using blood magic to change me, make me prefer women so I’d just suck it up, marry the girl, and give him another heir.”

“He thought I was just being stubborn. That I made a choice to be as I am.”

He didn’t know what to say to that.

“Maker knows what you must think of me now, after that whole display,” he murmured.

“To leave home like you did, and everything you did for my family without any hope of reward...

It’s nothing short of amazing. You are.”

Connor tugged at the ends of his sleeves. “And I know how it feels to not be what your parents wanted. My mother was willing to put me and everyone around me in danger just to hide my magic. If she could have taken away the magic, she would have.”

Dorian paused, looking down at the book and then back up at him with a small smile as he finally spoke.

“Thank you for coming out here with me,” he said softly.

“Of course I came.

I care about you.”

“Did you... Mean what you said before? About...” Dorian trailed off hesitantly, looking at the floor again.

He didn't need to finish for his meaning to be clear.

“I did,” Connor answered simply. “And I also enjoy your company. Specifically. If that's... Alright.”

“It is more than alright, I'd say,” he drawled.

He felt the blush creeping up his cheeks and turned his face away. “I'm not really good at this.”

“I just- There was no need for it in the Circle even if I was interested, and then with. Everything happened...”

Before he could think, Dorian kissed him. It was quick and nervous, and ended far too soon. He tried pulling Dorian back in, but Dorian leaned back with a smile that gave him butterflies.

“I liked that,” he said stupidly.

Dorian stared down at the floor in front of them, fidgeting. Connor reached over to hold Dorian’s hand.

“I’m wondering where this goes, you and I,” Dorian said slowly. “I like you. More than I should. More than might be wise.”

“And what’s so awful about that?”

“Where I come from, anything between two men is just...

[DAI Spoilers] Last Resort of Good Men: what did everyone do?

It’s not that you don’t care, it’s just... You learn not to hope for more,” he finished in a mumble.

“I’d like this to be more, if that’s what you want,” Connor offered.

Dorian smiled again, squeezing his hand gently. “I would like that.”

Connor moved closer to kiss him again, and Dorian raised his other hand to his shoulder.

“Now,” Dorian said in a low voice. “I believe this is where we left off, yes?

I’ll be more specific in my directions this time.”