In the year 2020, the “internet of things” has evolved into a wide array of wireless “smart home” devices for your large house that just rely too much on a strong wireless signal to be using some old weak wireless technology that frequently drops off at any point.

The Best Wireless and Bluetooth Speakers for 2020

That’s why you need mesh wifi if you’re paying for Netflix HD streaming in your upstairs bedroom, you demand instant high-speed picture and perfect high definition quality. Buffering is unacceptable and needs to be fixed. That’s where a Mesh WiFi Network comes into play for any large home or mansion. It is a net of wireless router signals overlapping or blanketing one another providing one single consistent strong wifi signal with no loss or degradation.

Something you can not obtain from a stand-alone traditional wifi router, extender or repeater access point.

With an old depreciated wireless N signal, you could never cover a 2,000+ foot home full of connected devices. You simply have to get Wireless AC and in many cases, not even a wireless extender will work.

You actually need a “Mesh Wireless Network” such as the highly rated Netgear Orbi RBK50.

This is the technological advance in smart home wireless networks that changes everything for your large multilevel home.

With wireless mesh topology, you have one SSID casting concurrently from two locations providing what seems like one super long range full power wireless signal to cover up to 5,000 square feet.

Whereas with a range extender or secondary access point router, your first wireless SSID casts to the second device, meeting in the middle and picking it up to recast it. Effectively losing half of the internet speed in the network handoff. With the old extender option, you also run into the issue of having to switch between wifi networks as you travel around the house. Both SSID’s may have the same name, but as you leave the range of the base station and into the extended wireless zone, you switch to that SSID causing an interruption or momentary drop off from your connection while transitioning to the second access point router.

The wireless extender set up may work for a device that does not roam around the house because it will stay on one SSID, but it is not the best choice for roaming or any laptop or TV that you want full speeds from. The wireless mesh presented here is the best possible wifi solution for any large home network. There are a few others on the market, but they had significant problems, and that is why Netgear created the Orbi, the best in large home wireless yet.

Easiest Set Up Possible
The Orbi WiFi is so easy to set up, I’m not even sure I want to call it installing anything.

You just press a button and they sync up on a dedicated backbone 5Ghz channel. You do not have to log into it or do anything to get them to talk to each other.

You gain instant WiFi access to a home wireless system strong enough to blanket the largest of homes with full coverage without any dead zones. It’s that easy. The Orbi device also has easy to use apps for both the iPhone and Android phones. You won’t really need this, but some people like it.

But most importantly, for the advanced user, The Orbi RBK50 kit uses the same premium web interface as the Netgear Nighthawk series routers. The fully configurable firewall built-in. This is a huge step up over any possible contenders. They all use proprietary configs that have not stood the test of time and lack essential features for any home network geek.

Penetrate Thick Walls In Any Home
Many people have problems with their internet signal in the basement, 3rd floor or even the 2nd floor.

Usually because of an obstruction between the two devices in a big house. With AC3000 Mesh Networking, this issue is eliminated, and you will still obtain full download speeds on the other side of the wall. The 5Ghz will break through cinder block, solid concrete, steel, electrical signals, halogen bulbs, sheetrock, lathe plaster, and much more. You no longer have to worry about your wifi being too weak to get to the upstairs bedroom. No matter what kind of walls you have.

Unless they’re lead, then you might have an issue. 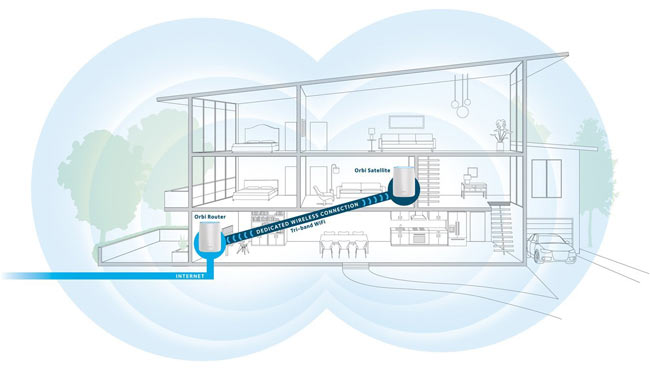 It is not a modem; it is a mesh wireless networking system that plugs into your existing modem and casts the internet signal via wireless transmission to your computers, laptops, TVs, and phones.

That means Orbi will work with any internet provider at all. You only have to plug into your existing modem.

The biggest con is that it cost more because it is a newer technology and works better than the older wireless standards.

This is something you have to expect with electronics. It will not go down anytime soon because there is not going to be anything to replace this efficient system and there is no need.

How we test Wi-Fi routers

The other con and a huge one for me is it is not as advanced as a powerful wireless router which can get ranges up to 5,000sqft if the router is set up in a central location with minimal interference.

Sounds like the wireless router is better for your big home, right?

Well, maybe not. It really depends on your situation. While the AC5300 router has a similar range, the speeds you will get on the outer perimeters of the effective coverage bubble will not be full speed.

It will degrade over distance. With the Orbi and the two router system, you will get full speeds at a much higher range as the signal recast at 100% bandwidth without loss or degradation between access points. Yes, the Orbi base package can cover up to 5,000 sq ft, but you can buy an extra satellite receiver and extend the range in another direction or outside to a guest house.

The ability to scale up by purchasing an additional receiver and pressing a button is a huge advantage, especially to those with huge homes.

For some reason, some claim the eero is a better home wireless mesh option, but I think they are just old outdated websites if they recommend this equipment.

The eero cost a lot more, it only covers 1,000 square feet per router, and you are forced to install a buggy app on your phone to manage it. It does not have Netgear’s high-end long-standing battle-tested web interface and superior hardware. 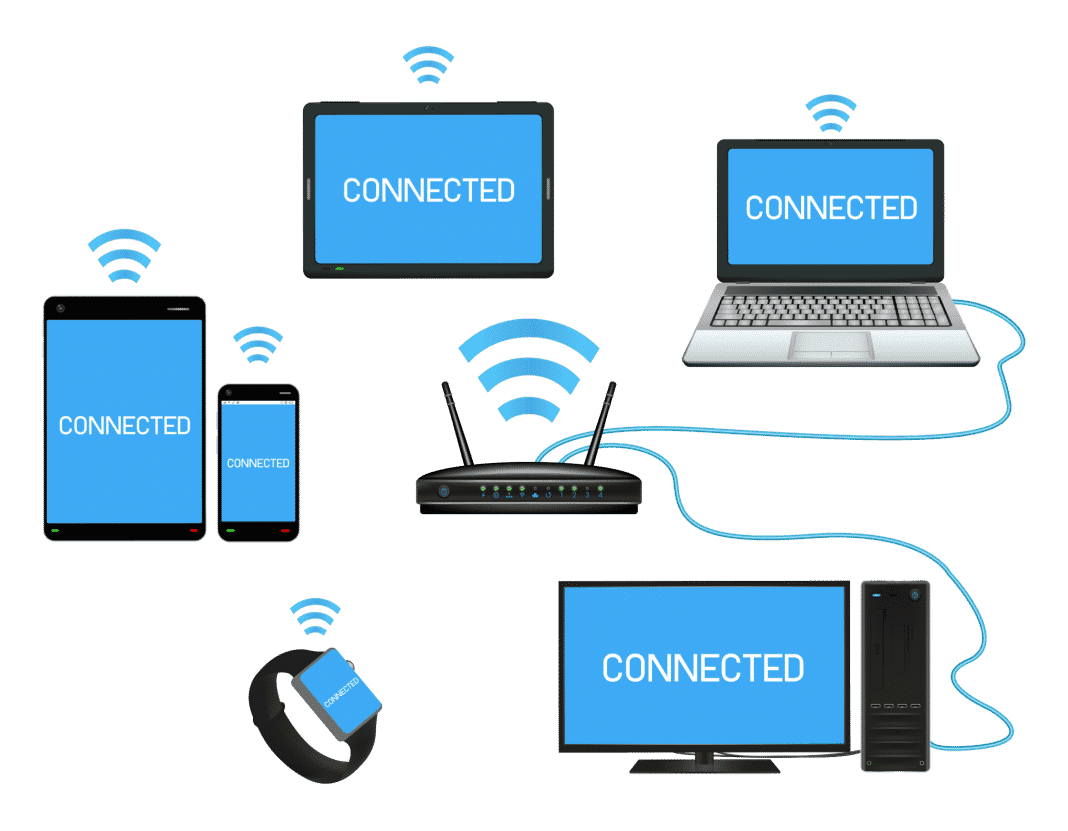 In fact, the software is just garbage according to many. I have not even touched it because it lacks the technology. It was an early adapter from a company that isn’t in the home or office wireless router business. I don’t even think it’s worth mentioning, but some people have asked me how it stands up to the Orbi home mesh.

It does not. It’s like comparing oranges to banana peels. Eero is a toy, stay away.

The choice may be a lot harder when put side by side with the Linksys Velop so be sure to check the full comparison chart for details on why we still recommend the Orbi over the Linksys.

However, there is no comparison at all when you put it side by side with the Google WiFi or the eero mesh kit. They should not be viewed as a possible contender when choosing a mesh home wifi system.

The bottom line, the Orbi mesh wifi network is the best wireless system available today for any spacious house.

It is an enterprise solution for a home network. Simple to set up and easy to add onto later.

It will blanket cover your entire home without signal loss or speed reductions while maintaining one large seamless wifi network so you can transition from router to router without interruption. It can handle up to 50 high usage devices and 250 conventional usage devices at the same time without performance loss. So it can be used in an enterprise business application as well. It will easily cover a 5,000 square foot home and many report it works further than that.

It will penetrate all types of obstacles to bring powerful wireless speeds all over the house and even outside to guest houses and poolside. It is the ultimate solution with a one time cost that will last the lifespan of your big house.

It is going to be a long time before this wifi standard gets replaced, if ever in our lifetime. Streaming 4k Ultra in the upstairs bedroom will never be a problem. However, if we switch to streaming holodecks into the backyard guest house, you may have to upgrade to whatever technology they come up with for that.

It should be noted that this does not act as a cable modem. If you use a cable service, you will still need to buy your own cable modem.

Now that you know, a conventional wireless router will not work for a very large home and coverage area.

You must get the best in wireless, a mesh wifi network. If your house is over 4,00 sq ft or an even larger 5,00 sq ft home, mesh wifi is for you.